Something about Abner H. Cook 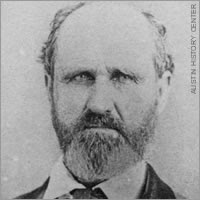 The name Abner Cook has popped up in a handful of news articles of late, what with the Sunday, June 8 fire at the Texas Governor’s Mansion in Austin. Cook designed the Greek revival building in the mid-1850s and it has been the home of every Chief Executive since 1856 (that being the term of Elisha M. Pease for those playing along at home).

Prior to his time in Austin, Cook lived and worked in Huntsville where his best-known project was the Texas State Penitentiary, or the Walls Unit, completed in 1848. However, there has been a long-standing assumption that Cook had a hand in creating the iconic Greek-revival Austin College Building on the SHSU campus.

Paul Culp, the university’s Special Collections librarian notes in an 1989 article that:


It has been traditionally maintained that Austin College was designed by Abner Cook, the master builder who created the finest residences in Texas before the Civil War (notably the Governor’s Mansion and a number of other beautiful house still standing in Austin), but evidence for this is largely circumstantial. He came to Huntsville...to build the penitentiary...and he was a trustee of Austin College; however he returned to Austin in 1850 (before the building was begun) and he is not mentioned except possibly by inference in the contract for construction which is preserved in the Walker County deed records. It is certainly not a wild conjecture, however, to assume that Cook would leave plans with his friend Robert Smither for a project in which he was so involved.

As for the Governor’s Mansion, it was said to be haunted by a handful of ghosts including that of Sam Houston himself.
at June 10, 2008