The College of Humanities and Social Sciences Building opens 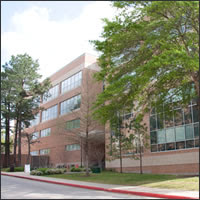 The newest (and fifth) “academic building” has opened on campus. The completion of the College of Humanities and Social Sciences Building – originally referred to as Academic Building V – means a number of departments (and Dean de Castro) will be starting off the new year in a new home. Moving to the CHSS building are:
Today@Sam points out that the vacated offices will obviously cause future moves within other buildings, which Today@Sam goes over in more detail if you’re into that sort of thing. Of note is that the clinical psychology program will move into the Career Services building in February 2009.

According to Meagan Ellsworth’s January 13th Houstonian article, “students were in classes [Monday] morning and accessing faculty offices as well. The fourth floor is still having last things done to it.” And they have a computer lab.