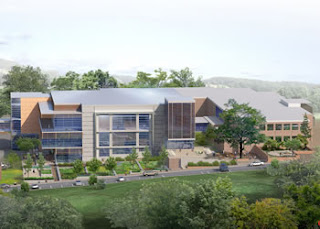 Today@Sam reports that during Homecoming 2012 students will have the opportunity to vote for two referendum items, including fee increases that would benefit students through the Lowman Student Center (LSC) Expansion.  To fund the new construction, requests have been made to increase the Student Center Fee to its legislative cap, from $60 to $100.  Voting takes place Tuesday, Oct. 16 and Wednesday, Oct. 17.

The Lowman Student Center Expansion Project calls for two phases: phase one would build on the former Smith-Kirkley site, and phase two would include renovations to the existing facility.

Plans for phase one would open the LSC to bring in more natural light and create a more inviting place. The bottom level of the expansion will be all food services, as a replacement for the existing food court, that would provide more indoor seating and tie into outdoor seating that will be between the building and Avenue J. The second level ties into the current LSC where the atrium is located and would merge the existing building to the new expansion, as well as connect to the third level of the parking garage. This level would add more meeting rooms and create a pre-event space for events held in the LSC Ballroom or in the large conference rooms.

The top floor of the expansion will include a grand ballroom, an 11,000-square foot floor that could seat 650 guests at round tables or more than 1,000 in a chairs-only setting.  Renovations would also entail converting the current food court into an entertainment level: "The vision is to transition our current Kat Klub to a six-to-eight lane bowling alley with a pub."  The LSC staff are working with the SHSU bowling coach to create a partnership, as the lanes would benefit both the team and the students.

You can discuss the Lowman Student Center Expansion Project at KatFans.
at October 01, 2012