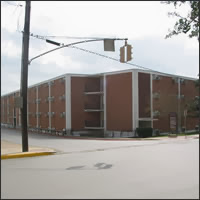 White Hall, the 140-bed dormitory on the south side of the SHSU campus, is being fast-tracked for demolition, reports Today@Sam, due to a suggestive satellite appearance:


Residence Life staff were surprised to discover that the layout of the dorm, when viewed from above on mapping sites such as Google and MapQuest, appeared similar to an improper hand gesture. It was brought to the attention of the administration in late March.

"The fifty-year-old dorm was already marked as a possible demolition candidate on the most recent master plan," [SHSU Physical Plant representative Lens] Vicieae said, citing its location at the corner of Avenue I and Bowers Boulevard. "This discovery seems to help us in our decision of when it needs to be taken down. When it was constructed [the university] didn't take into account such things as satellite images. Now with mapping tools and FourSquare, [White Hall] is more visible than it was before."

Vicieae added that property the university recently purchased across from White Hall was tentatively planned as a site for new housing and, should that plan follow through, they will attempt a more aesthetically pleasing structure.

You got me. And it's not even April 1 anymore!

I like to think that a number of people raced to those aforementioned mapping sites to see just how suggestive the dorm appeared.

This article is idiotic. Clearly residence life staff has too much time on its hands if they look at google maps all day long and think about what the buildings look like. The school needs to worry about repaving the roads and fixing the intersection next to these dorms.